A petition has been filed to block Facebook in Pakistan

Civil Society has filed a petition in Islamabad High Court to shut down Facebook temporarily in Pakistan. The petitioner says that social media website should be banned until the government has permanently removed all the blasphemous content from the website as reported by The Nation.

It should be noted here that in May 2010, all the internet service providers in Pakistan were ordered to block Facebook in response to a widely promoted blasphemous event. In September 2012, controversial content on YouTube appeared too, owing to which YouTube was blocked in Pakistan. 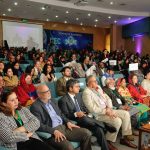