In 2015, we saw many interesting developments in Pakistan Telecom Industry. In the first half of the year, we had a very aggressive SIM verification drive. The drive saw a loss of 22 Million users and a total of 81 Million SIMs were verified. The government taxed mobile data usage several times, sending the public in a fit of rage every time. The ban has since been lifted but in Punjab only. Here we present a breakdown of the highlights from the Pakistan Telecom Industry’s performance in the year 2015.

According to the PTA, Pakistan now has around 122 Million Cellular Subscribers; a figure lower than last year due to the crackdown on unverified SIM cards issued. Both high speed mobile (3G/4G) and broadband subscriber base has grown considerably reaching 20 Million and 23 Million, respectively. The broadband subscriber base includes cellular high speed data connections (3G/4G/EVO), which if taken out results in a meager 1.5 Million fixed line broadband subscriber base. Fixed line segment growth slowed in 2015 to 10% due to strong competition from wireless broadband segment (EVO/3G/4G). Going forward, higher growth is expected from the wireless segment compared to wireline services as competition is expected to drive down data ARPUs. The dominance of one supplier of data services in wireline segment (PTCL) has led to slow expansion of the segment. Having said that, the broadband and cellular data tele-density in Pakistan is low when compared to other developing and developed countries.

The number of 3G/4G subscribers are expanding as operators expand these services in rural areas and the awareness among masses is created about the benefits of using data services on the go e.g. VoIP, Navigation, E-Commerce, Music & Video Streaming etc.

The market dynamics have remained unaltered

Market dynamics have not seen a considerable change in the past one year with all operators maintaining subscriber market shares even after the widespread SIM verification campaign which led to a decrease in active SIMs. Mobilink leads with 29% market share and is closely followed by Telenor with a 27% market share in term of subscribers. However, after the recent merger between Mobilink and Warid, the new entity will emerge is the largest operator in Pakistan with a combined 38% market share which is well above the other players.

An analysis of 3G/4G subscriber growth in the most recent last two quarters reflects some interesting facts. Mobilink led the growth in 3G/4G subscribers by a wide margin compared to other operators if both quarters are combined. The new Mobilink-Warid entity emerges as the de-facto leader in term of 3G/4G penetration in the network.

An analysis of 3G/4G subscriber growth in most recent last two quarters reflects some interesting facts. Mobilink led the growth in 3G/4G subscribers by a wide margin compared to other operators if both quarters are combined. Taken together with Warid, the new entity (Mobilink-Warid) emerge as the de-facto leader in term of 3G/4G penetration in the network.

The tax burden on telecom operators may be too big

A synopsis of taxes borne by end consumers and telecom operators indicates that Pakistan Telecommunication Industry (PTA) is riddled with a heavy tax burden. Here is a complete breakdown of the tax situation:

Furthermore, there are custom duties on the import of telecommunication hardware equipment in the range of 10% – 25%. Telecommunication industry in Pakistan is highly taxed when compared to the world. A reported prepared by Deloitte consulting group examined the burden of taxes and has linked reduction of taxes with growth in mobile services & economy.

There appears to be no clear winner for 3G Services

PTA conducted Quality of Service survey for voice and 2G, 3G, and 4G data services. The survey yielded some interesting results with Mobilink having the lowest network downtime among all operators. Telenor scored the best numbers for Grade of Service and Accessibility. Mobilink also had the lowest call connection time and Warid had the highest call completion ratio. In data services, Mobilink stood out with the best 3G download speeds followed by ZONG. The top scores of Mobilink came as no surprise because it bought a 10 MHz 3G band in 3G spectrum auction compared to 5 MHz band by Telenor and Ufone from PTA earlier this year. There was some disparity in results when looked at city-wise confirming the notion that the quality of services may vary with city. 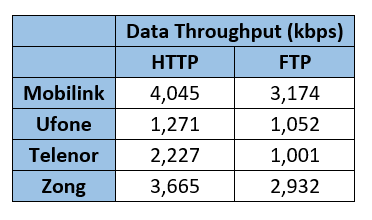 The rise of E-Commerce

2015 saw huge activity in e-commerce space which has been previously unheard of in Pakistan. New e-commerce startups led by local entrepreneurs and fueled by international VC firms generated tangible activity in E-commerce space. Websites like bookme.pk, foodpanda.pk, eatoye.pk, Daraz.pk, homeshopping.pk, kaymu.pk. Zameen.com and many others have been hugely popular among consumers. This year Daraz.pk, Kaymu.pk, Homeshopping.pk and many others announced special Black Friday discounts by following North American retailers. A look at the traffic and order statistics of these website indicates that more users shopped online than any of these websites anticipated beforehand. Government has given the green signal to bring in Amazon, eBay, and PayPal next year, and Paypal themself recently expressed their interest in Pakistan, making 2016 an even more happening year for the Ecommerce space.

On November 26, Mobilink and Warid, two mobile operators in Pakistan, announced a merger with Vimpel Telecom & Global Telecom, the parent company of Mobilink, acquiring 100% shareholding of Warid Telecom from Abu Dhabi Group against 15% shares of the new combined entity. The rationale behind merger includes USD 500 Million of cost synergies and the ability to deploy 4G services without outright purchase of the license.

The merger reflects the need for consolidation in an increasingly competitive market with tight margins where companies with strong financial position has an added advantage over smaller players to withstand market pressures and expand market share.