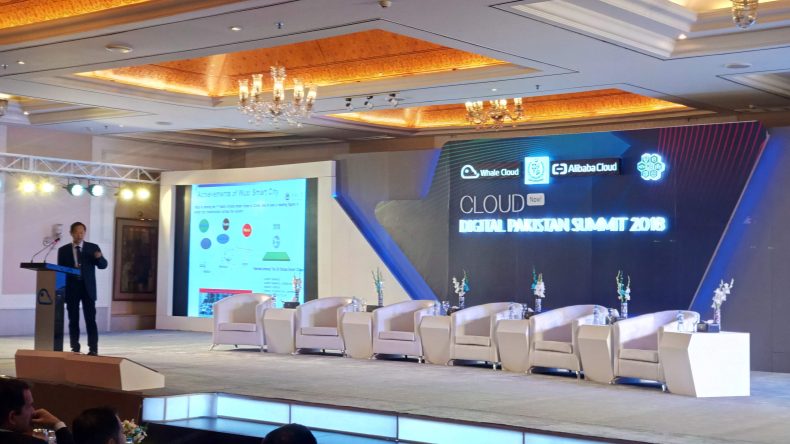 Whale Cloud, a strategic partner for cloud services to Alibaba Cloud, collaborated with the Pakistani Government to organize a massive Digital Pakistan Summit to emphasize the importance of IT in a thriving country like Pakistan.

Whale Cloud, an internet cloud services provider firm from China, organized a Digital Pakistan Summit seminar in collaboration with the Ministry of Information and Technology Pakistan. The event which took place at the Serena Hotel in Islamabad, yesterday invited hundreds of talented individuals from the arena of technology, innovation and economic development from Pakistan as well as from abroad, mainly China.

With an aim to turn Pakistan into the World’s next major Digital Innovation Hub by 2030, the event attracted as much as 250 distinguished guests, many of whom were given the podium to share their knowledge with the audience. The summit was directed at initiating different impact-driven projects across the Pakistani landscape by primarily engaging the cloud technologies as offered by Alibaba.

Speaking as to how this project would add value to the digitalization of Pakistan, Ben Zhou, the CEO of Whale Cloud, mentioned that he could see this dream come true. “Digital Pakistan is no more a Pakistan is no more a dream, it will become a reality soon”, he mentioned. Davy Chen, the President of Whale Cloud for South East Asia also mentioned that this project would create immense job opportunities for Pakistanis.

“With a major investment plan, we will not only contribute towards Pakistan’s economy but will also help in creating jobs vertically as well horizontally”, Mr. Davy Chen further mentioned.

The event of magnificent stature included seminars and panel discussions on tech topics like smart cities, ecommerce and pattern recognition. Professor Wu from Institute of Science and Technology at Jian gnan University in China, Senior Analyst at HIS Markit Rita Liu, the Director Innovative Business Research at Alibaba Gary Lee were among other dignitaries who tended to the audience. The Minister of IT, Mr. Khalid Maqbool Siddiqui and the members of PM’s IT Task Force, more notably including Zohair Khaliq and Pervez Abbasi were also present at the occasion.

The entry of Whale Cloud in the Pakistani arena could of really great value considering the company’s speciality in cloud and how this service can disrupt domains including smart cities, mobile payments, delivery services, farming, smart homes and security. Earlier it was brought to notice that Whale Cloud would be investing as much as $70 million in Pakistan’s economy.