The idea of an Elon Musk-led company creating a smartphone has caught the imagination of many over the years, so much so that some YouTube channels continue to peddle the alleged release of products like the “Tesla Pi Phone” that’s supposedly poised to compete with Apple’s iPhone and other smartphones. (This may sound insane, but such videos are still garnering views today).

But while such videos have become quite a running joke among those who closely follow Elon Musk and his projects, recent comments by the Tesla CEO suggest that a smartphone from a Musk-led company may not be too farfetched at all.

Musk has been neck-deep in controversy since he completed his acquisition of the social media platform Twitter. Among his most recent controversial moves involved a poll that asked users of the platform if it would be a good idea to offer a general amnesty to suspended accounts.

Podcaster Liz Wheeler first proposed the idea to Musk via Twitter: “If Apple and Google boot Twitter from their app stores, Elon Musk should produce his own smartphone. Half the country would happily ditch the biased, snooping iPhone and android. The man builds rockets to Mars, a silly little smartphone should be easy, right?”

Musk replied, “I certainly hope it does not come to that, but, yes, if there is no other choice, I will make an alternative phone.”

In a recent New York Time op-ed, Twitter’s former head of trust and safety, Yoel Roth, wrote about concerns he heard regarding Twitter’s future in the app stores. “Twitter will have to balance its new owner’s goals against the practical realities of life on Apple’s and Google’s internet….And as I departed the company, the calls from the app review teams had already begun.”

Although neither Apple nor Google have officially said or indicated they plan to ban Twitter, both companies do have policies in place that prevent hate speech, discrimination, and harassment. Both companies have at one point banned Parler, a right-wing alternative to Twitter, though Apple let it return to its App store in April 2021, and Google reinstated the app this September after it made improvements to its moderation policies.

Musk previously said he would not reinstate any Twitter account without forming a “content moderation council with widely diverse viewpoints,” but he quickly backpedaled on that, reinstating Trump’s account after conducting a Twitter poll. The company also experienced a wave of impersonations and fake news after Musk decided to turn Twitter’s blue checkmark, originally a way to verify a user’s identity, into something you can buy for $8 a month (the company is currently reworking the system, and a re-launch is expected on Friday). 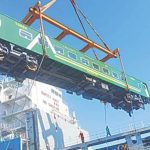