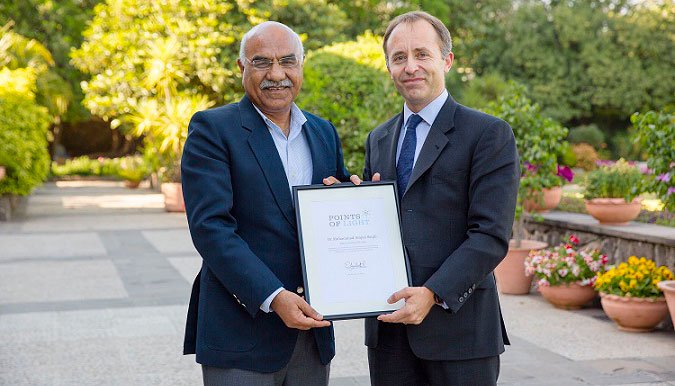 The UK High Commissioner in Pakistan, Thomas Drew presented the award to Dr. Saqib and shared, “I am delighted to present Dr. Muhammad Amjad Saqib with the Commonwealth Point of Light award for his exceptional voluntary service that has benefitted hundreds of thousands of disadvantaged people.”

Upon receiving the Award, Dr. Saqib said, “Poverty is poison. Poverty is pain. We need to rise together and make a concerted effort to reduce poverty and make this world a happy place to live in”.

Akhuwat has been providing interest-free loans to the economically disadvantaged empowering them to setup means of incomes for themselves. Initiated in 2001, Akhuwat now has 700 branches in 350 cities across Pakistan. The organization has enabled over 600,000 locals to become self-reliant and earn a respectable income. They have provided over $484 million in interest-free loans with a surprising recovery rate of 99.96%. The recovery rate defines the success of Akhuwat as compared to similar micro-finance institutions. The operational costs of the organization are covered by donations.

Akhuwat has also been supporting initiatives for education. They have established Akhuwat College in 2015 that provides a residential facility for students who do not have access to quality education. Moreover, Akhuwat University is to be launched in November of this year as Pakistan’s first free university that will support over 600 students.