YouTube officially launched its built-in messaging feature for everyone in August 2017. However, that was a mobile-only feature available to Android and iOS users. The feature was not accessible to the web users. The Youtube web users were unable to send messages, share videos and reply a message. Now, Youtube has officially announced that it is bringing the mobile-only feature to the web as well.

The new conversation bubble is showing up between the notification bell and other YouTube apps. Chat history will appear on the bottom right of the screen through which you can scroll the previously shared videos, and continue the conversations. You can also share videos in private chats by tapping the ‘share’ button under any video and then select the user whom you want to send the content. You can also share the content with multiple users. Like other messaging apps, you can send a ‘heart’ to the videos you liked. The update is hitting the web today but it might take a week or so to be available for everyone. 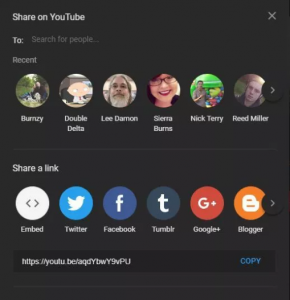 YouTube has been adding multiple features since the start of 2018 to make it easy and more convenient to its users. Earlier, this month YouTube has launched Incognito mode to hide the browsing history. With Incognito Mode on, all your activity from the current session is not saved and subscriptions are hidden too. A few days back, Google has announced its new music-streaming service YouTube Music. The service has all the Google’s AI-powered search and insights, and a focus on finding new tunes like its bigger sibling YouTube Videos.