Hongmeng OS is not for smartphones, will keep using Android: Huawei VP confirms

Huawei’s own operating system (OS) which was believed to be the savior of Huawei and its answer to the great Android OS might not be making an entrance now.

Senior Vice President and Board Member of Huawei, Catherine Chen has said that the upcoming Hongmeng OS is not for smartphones and the company is planning to continue using Google’s Android on its mobile devices, as reported by GizmoChina.

Earlier, when the US government imposed a trade ban of Huawei and Google ended the Android support, the company said that they are developing their own OS and would start using that in their smartphones in the future. Moreover, in the recently conducted software test, Huawei claimed that their OS is 60% faster than the Android mobile OS. Many fans praised the decision from Huawei and were anxiously waiting for the release of Hongmeng OS.

The CEO and founder of Huawei previously said that Hongmeng will be used in various products including routers, network switches, tablets, computers and data centers. The company was also testing the system on smartphones and a few testers had also shared their experience. But now it seems that the tech giant has decided not to use Hongmeng as the Trump administration has allowed the US companies to resume doing business with Huawei under certain conditions.

The vice president added that Huawei’s OS is created for industrial use and we have been developing the system long before the discussions about finding an alternative to Android started. She further said that the Hongmeng is very secure, as it is based on fewer lines of codes compared to a mobile OS and has extreme low latency.

Furthermore, Huawei also trademarked another operating system called Harmony OS, which could be the global name of the Hongmeng OS or the name of the Android alternative. For now, there is not much known, but we expect the company to share more details on this during Huawei’s Annual Developers Conference next month. We will update you as soon as we know more. 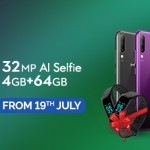