Bilal Ahmad, a mathematics teacher in the capital of Indian Illegally Occupied Jammu and Kashmir (IIOJK), built the region’s first solar-electric car that runs entirely on solar energy and can also be charged with electrical power after 13 years of effort and hardship.

After his images and videos of the automobile went viral on social media last month, Ahmad, 40, became an overnight star in the region.

Ahmad expressed shock and disbelief that his product had received such a positive response and recognition from the people while speaking with Anadolu Agency at his house in Srinagar.

“I never expected that my idea would generate such favorable reactions from people,” he added, alluding to being dubbed “Elon Musk of Kashmir” when his solar-powered car went viral.

In 2009, Ahmad was emotionally moved by an article in which he read that gas costs would rise dramatically in the future, making it difficult for the typical individual to buy a car.

“So I wanted to create something that everyone could afford,” Ahmad said.

When Ahmad graduated from a college in the Indian state of Bengaluru with a civil engineering degree in 2007, he was ready to use his skills and knowledge.

He began working on his dream project of producing a solar automobile that was affordable to the general public two years later.

He began by reading articles and watching videos on social media to understand better how he might carry out and realize his idea.

“For this project, I did much preparation and research. I made certain that anything I attempted was unique and successful,” he elaborated.

As a result, he began reading and studying vehicles from across the world that first appeared in the 1950s. He was influenced by the work of Delorean, a Detroit-based inventor, and innovator who owned the vehicle firm DMC. 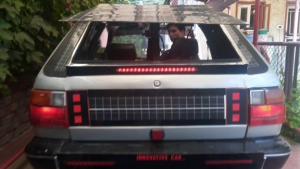 However, Ahmad had to overcome several obstacles to realize his ideal project. He was dismayed by the cycles of violence, limited resources, and financial challenges, yet he did not give up.

“I understood there would be complications resulting from the scenario when I started working on the project,” Ahmad explained.

His vehicle is a four-seat luxury solar car, unlike other solar automobiles, which generally have two seats.

The automobile has monocrystalline solar panels affixed to its front, top, and rear surface area, which are exposed to the sun to create as much energy as possible to power the vehicle. In addition, the automobile can charge via electricity if solar energy is in short supply.

“This automobile is completely automated and has gullwing doors to accommodate the space constraints,” he said as he drove it.

Ahmad stated that he had a few meetings with Anand Mahindra’s team to work on his production and that his current objective is to patent it as quickly as possible so that ordinary people may buy it. 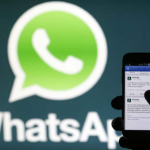 Watsapp Will Not Work On Some iPhones From 24 October