NUST campus to be setup in Sialkot: Government releases funds worth Rs 180 million

The Federal Government of Pakistan has released the essential preliminary funds to establish a dedicated campus of the National University of Sciences and Technology (NUST) in Sialkot, said the Federal Minister.

While talking to the Media in Islamabad, the Federal Minister for Defence, Water and Power, Khawaja Muhammad Asif, said that a special grant was released worth PKR 180 million was released as the first installment in order to setup the NUST’s campus in Sambrial, Sialkot. He further said that the campus would span over 150 acres of land that would be built using an approximate cost of Rs 4 billion.

The minister added that the campus would focus on advanced technology and engineering courses that would be specifically curated to the forthcoming needs of the industries that bear an export-oriented outlook.

2 Replies to “NUST campus to be setup in Sialkot: Government releases funds worth Rs 180 million” 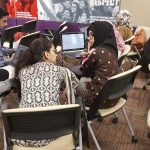