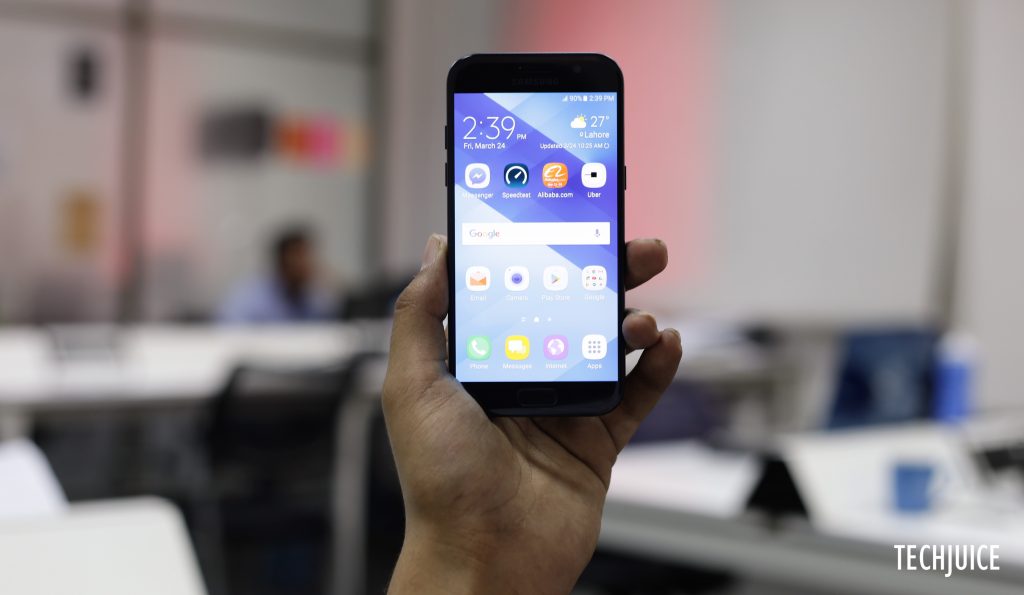 Samsung, as is the case every year, Samsung is refreshing its A-series lineup. With each iteration, Samsung gradually adds somethings and changes few others so the lineup remains just enough to be called a fresh one. Given the market direction and customer satisfaction, this is an understandable strategy. With this year’s A series, Samsung is upping the scales a bit by rejuvenating the devices with water resistance and a (kind of) new design. We have already taken a look at the biggest brother of this series, A7, you can read more about it here. All three devices of series, A3, A5, and A7 are very similar to each other. This Samsung Galaxy A5 2017 review will focus on how it behaves independently from its other siblings. 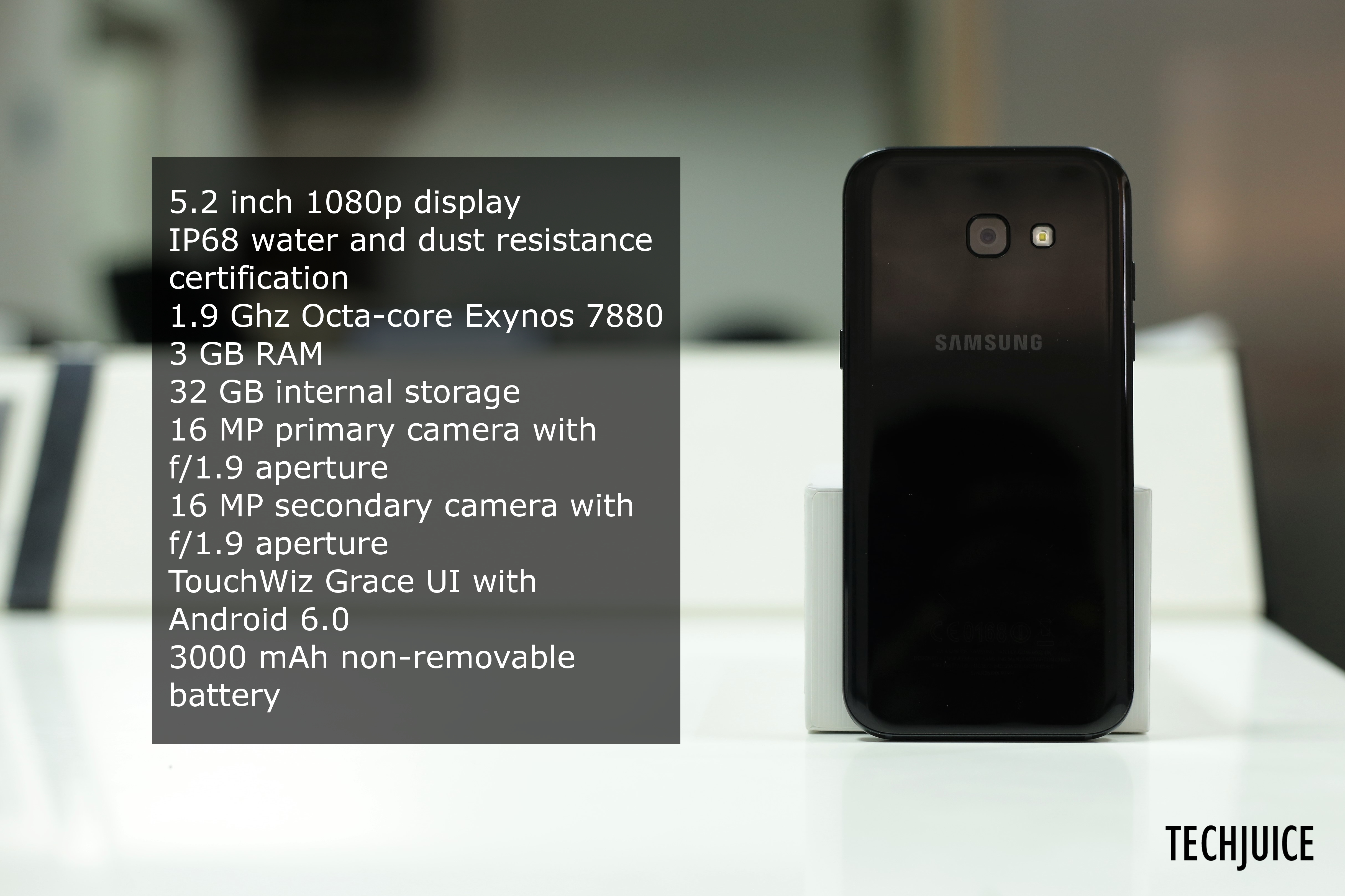 Before taking a detailed look on the phone, let’s look at some positive and negative points of Galaxy A5 2017.

Here are some good points of Samsung Galaxy A5 2017:

Samsung is never known to be the most proficient in providing every tool to its users. But it does provide a fair share of accessories with Samsung Galaxy A5 2017. In addition the the device, here’s what you get in the box: 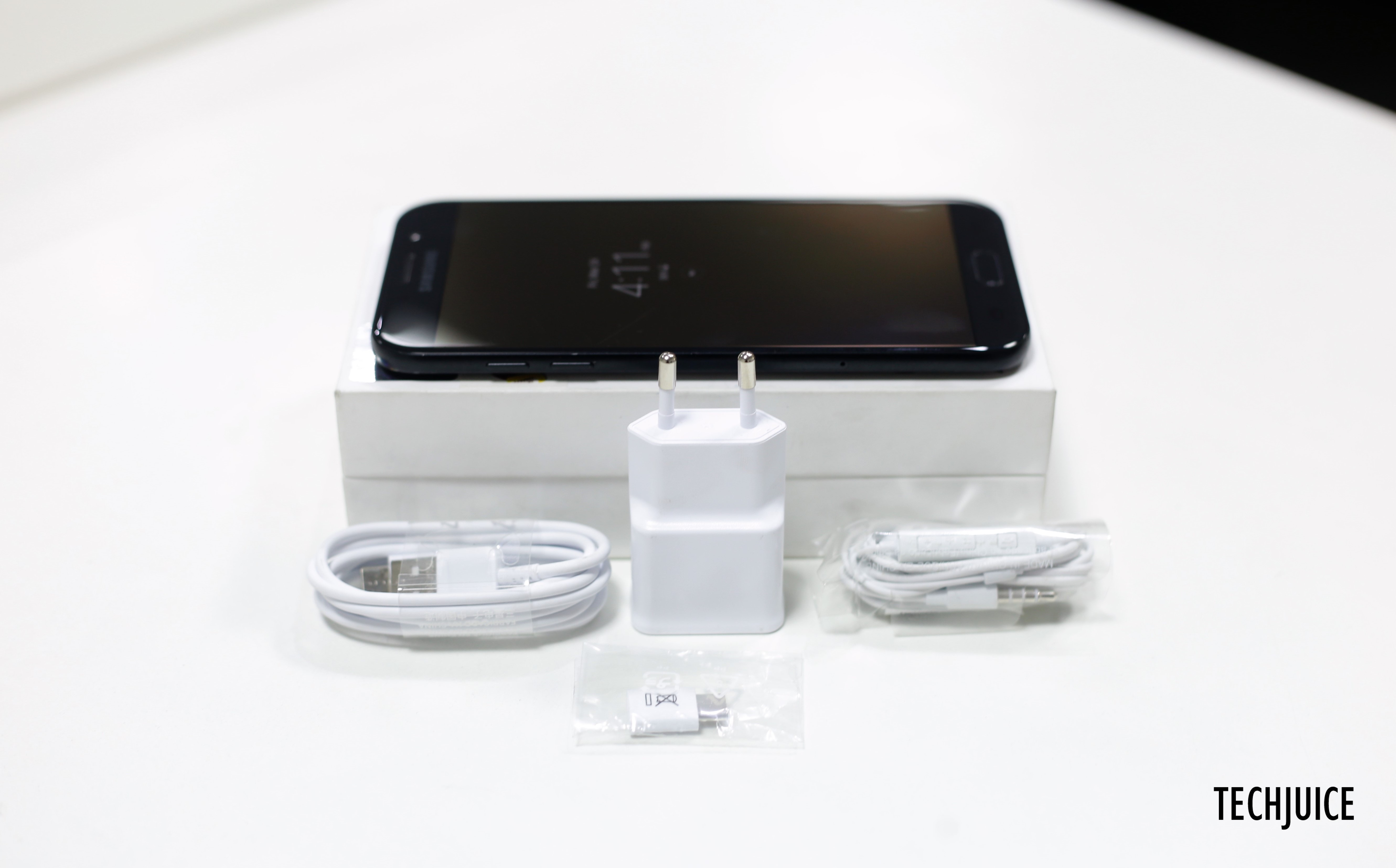 Before I go ahead and rant about oleophobic coating and other granular details, let me get this out of the way — this phone looks great. It follows the same design principles as Samsung’s higher end S series devices. With glass on both sides and a slight curve on the sides at back, it has an extremely attractive and premium look. But all of this comes at a cost — durability. As is the case with its elder brother, A5 is very susceptible to fingerprints and scratches. I spent a major of my time using it by cleaning the back off with a piece of cloth. So if you plan to buy this device, and don’t want to go crazy with concern, make sure to buy a protective case along with it.

Note: Samsung is providing a free Neon flip cover along with retail units. I didn’t receive one with the review unit so it is not possible for me to claim that it will provide sufficient protection to A5 2017. 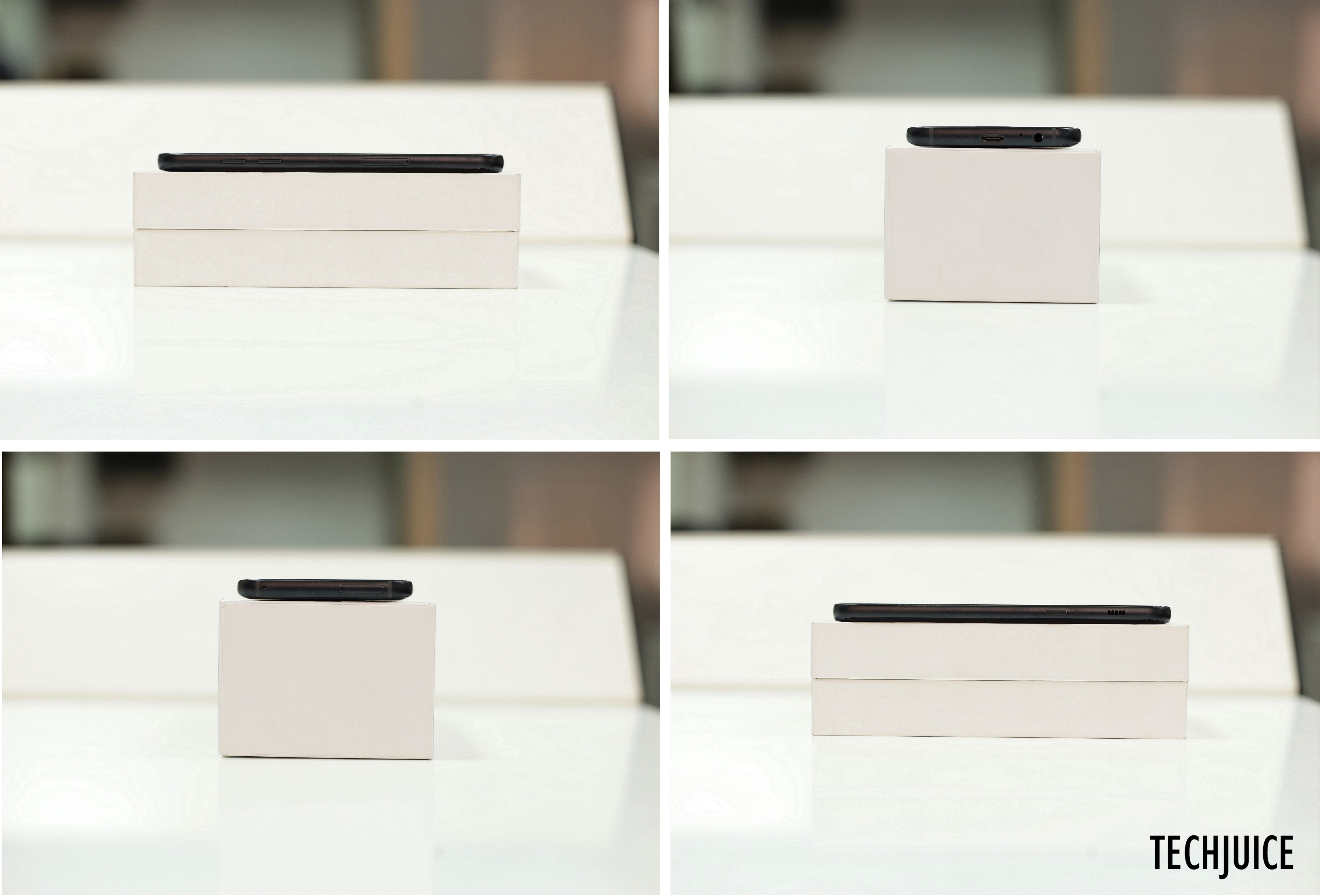 A5 2017, like all other 2017 A series devices, has IP68 water and dust resistance certification. This means that it can be submerged in 3 meter deep water for about 30 minutes and the device should work perfectly fine. Most users, however, are not going to subject their new and pricey phone to these extreme conditions. So to simulate a normal use case scenario, a typical monsoon downpour, I kept the phone under a showerhead for about 10 minutes. As expected, the device functioned normally after going through this ordeal. I did face some issues with the earpiece at first, but it fixed itself within a couple of hours.

Galaxy A5 2017 rocks the new TouchWIz Grace UI which debut last year. It doesn’t have the Nougat update yet, but considering that older devices have started receiving the update, it should be right around the corner. Before going further, let me clarify that I am a big fan of stock Android, so I generally don’t like manufacturers and ROMs which try to change stuff just for the sake of it. But Samsung, in the process of taking every aspect of stock Android and making it their own, have introduced a number of useful features which make the whole experience much more enjoyable.

Similar to Android 7.0, Samsung has included various multitasking features in A5 2017. You can run two applications side by side using snap or you can even put them in their own tiny windows which float around while you continue working in some other application. I haven’t really used these multitasking features a lot, but it’s good to know they are there in case the need arises.

There are also some other minor features which users will probably use much more. There is a device maintenance feature which keeps track of possible issues which can cause performance to suffer. It monitors resource intensive applications and closes any unnecessary service which is running in the background.

Both A7 and A5 have been fitted with Exynos 7880. In terms of raw performance, it is a little bit more powerful than a Snapdragon 630 processor. So it’s not really a power house, but it does get the job done. With Samsung’s excellent process and RAM management, things always remain buttery smooth. I haven’t really faced any slowdowns or crashes while using this phone. Games do load a bit slower, and graphic intensive games might take a hit in the fps department a bit, but mostly it performs adequately for normal usage.

But… As is the case with A7 2017, A5 is also overpriced for what it has to offer. With a retail price of 47K Pakistani Rupees (North of $450), I expected a little bit more from this device. Geekbench and AnTuTu benchmark results reflect my concerns. A5 2017’s scores are shockingly similar to devices which cost almost half of what it is retailing for in Pakistan.

Samsung is known for its good displays, so assuming that a phone by Samsung will have excellent screen is no rocket science. Thankfully this assumption holds for A5 2017 too. The 1080p Amoled screen is amazing with good color contrast, great outdoor visibility and more than enough pixel density. It would probably be a sin to say something bad about it just for the sake of it.

Another aspect which Samsung devices are almost always expected to ace is the camera. Arguably, Samsung makes the best camera phones in the world. Unsurprisingly, expectations were quite for me before I started using this phone. A7 almost lived up to this expectation. Almost… While the 16 MP primary camera is exceptionally good itself, Samsung, for unknown reasons (definitely not related to cost), decided to refrain from using any form of stabilization technology. I dug around in the settings and couldn’t even find something related to software stabilization (which could probably still arrive via a software update, but don’t hold your breath for it). So what’s the end result? Great looking photos most of the time, with occasional blurry photos due to slight movement of hand.

The front camera is of same resolution and offers a pretty good experience overall. It does suffer from occasional blurry pictures but that can be expected from any fixed focus front camera. Over all the camera gets a solid A- from my side. You can view some untouched camera samples here if you want to compare the quality yourself.

What to conclude from this Samsung Galaxy A5 2017 review?

Already gone through the whole review? I sure hope you did that. When we take a look at A5 2017 from a completely objective point of view and ignore its price all together, it seems to be a pretty good smartphone. It checks nearly all boxes which make a device good for consumers. Display? Check. Battery life? Check. Camera? Definitely check this one. Performance? This one gets a check too. So what’s the issue? Why am I not telling all of you to run out and by A5 before it goes completely out of stock? Well… That is explained by its price. Coming at a retail price of PKR 47,000, it is not exactly a steal. There are a number of other devices out in the market with less than half its price and they offer similar specs and performance. So if you are not hell bent on buying into the Samsung brand, you should probably survey the market a bit more and look at devices by other manufacturers like Huawei, Infinix and Xiaomi. 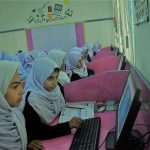