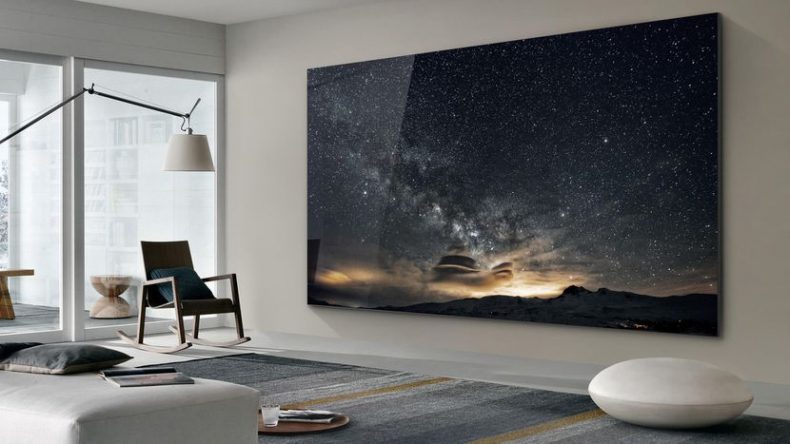 The South-Korea based tech giant has unveiled one of the World’s largest commercially available TV screens, in its “The Wall” series.

As the World’s largest tech show, the Consumer Electronics Show 2019, is finally having its last few announces, Samsung has unveiled a massive TV screen which spans over a huge 219-inches. The second publicly released version of “The Wall”, the 219-inch TV screen is a Micro LED TV which doesn’t come in one piece. The users will be able to customize this insanely large TV screen as per their own liking using modular kind of units that could be joined together.

Micro LED is a new TV technology that builds upon millions of tinier self-emissive LEDs, called the Micro-LEDs. Millions of inorganic red, green and blue microscopic LEDs are needed to make one image. Samsung is terming Micro LEDs as “forefront of the next screen revolution” and “The Wall” is one of the first few TVs to feature this technology.

Also Read: This is the World’s first Alexa-powered e-bike

The Micro LED technology is being accredited with truer Black tones and brightness which is astonishingly high. The modular pieces with the help of which such a big screen is built don’t seem to be visible if one is standing about 6 feet away. Samsung had announced such a TV last year too, a bit smaller in size, the last year’s The Wall version had noticeable gaps between the modules.

Apart from the huge 219-inch screen, Samsung also got onto the bandwagon and revealed 8K TVs. The other notable TV manufacturers also had their 8K TVs on display. Samsung hasn’t yet quoted any price for The Wall.

previous
Apple to reportedly introduce a triple-lens iPhone this year
random
next
Amazon, Alexa, Pakistan and everything else from Tech Summit Lahore 2019
Trending Posts