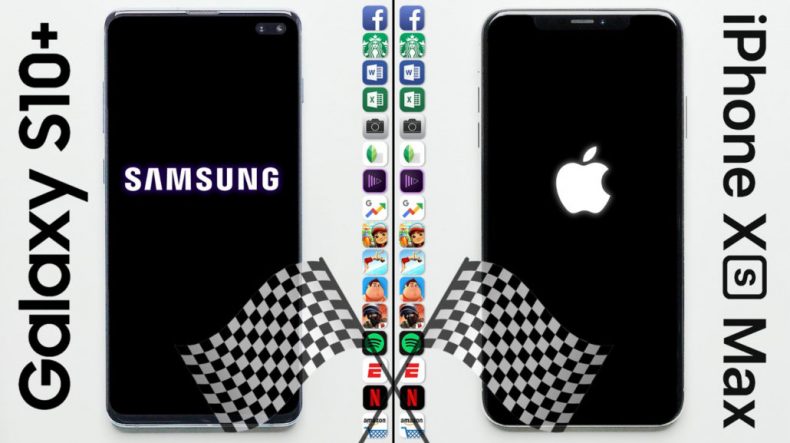 iPhone may not have the throne in several departments when compared to its Android counterparts, however raw processing power and superior app-optimization is where Apple’s iPhone has always shined. Ever since the introduction of Apple’s 7nm A11 bionic chip, the iPhone brand took a gigantic leap in terms of processing power and for two consecutive years overwhelmingly defeated its Android counterparts.

However, with the introduction of Snapdragon 855 which is also a 7nm chip, things have changed. The raw power required to compete with Apple’s latest A12 was now provided by the Snapdragon 855 thanks to the introduction of its 7nm processor. As it was evident from the speed test, the first round which predominantly showcased the processing power of both of the phones was pretty neck and neck, with the A10 processor coming slightly ahead by a few seconds.

While the test didn’t show anything exciting for the iPhone XS Max, the Galaxy S10 Plus however showed much better improvement compared to its previous generations. The iPhone XS Max ended the first round at 1:50 while the S10 Plus finished it at 1:54.

Round 2 was where things got interesting, as opposed to the first round which tested the raw processing power of both of the phones, the second round tested the RAM management and app optimization of the devices. While the iPhone XS Max had the initial advantage because of winning the previous round and having a heads-up of four seconds. The Galaxy S10 Plus, however, took those extra four seconds (that iPhone XS Max) had out of the equation.

It should be noted that the Galaxy S10 Plus (8GB) has twice the RAM of iPhone XS Max(4GB). With the iPhone failing to keep Microsoft Excel, Word and Starbucks open, the Galaxy S10 Plus took the lead and subsequently won the speed test.
Previously iPhone XS Max won against the Galaxy Note 9 which also had 8GB of RAM, however, the difference was in the processor as the Note 9 was powered by Snapdragon 845 which is a 10nm processor and considerably less powerful than 855.

Will Apple increase the RAM size of its upcoming iPhone considering the Android phones have now caught up with its mighty A12 chip? Only time will tell.