A robotics project developed by Pakistani students has secured 4th position in the World Robotic Olympia (WRO) held in Canada.  Ibrahim, Burhanduddin, Mustansar of class 7, 8 and 10 respectively made the project in just 2 weeks time to secure the position in the Olympia.

The robot in question can help in fighting against forest fires, which is a major issue in America and Canada. The segment where the students are explaining their project can be seen below:

The trio was guided by their teacher Mr Hussain and they participated in the competition. The project was built using LEGO expansion packs which are programmable. In the olympiad, the students were tasked with a problem related to climate change and with that problem statement in mind, the students created these LEGO robots. The first robot is a sprinkler machine which can be used to put out the fire as soon as the infrared sensor detects the presence of a wildfire. The second robot aims to capture and store carbon dioxide through a fan and a storage compartment which is connected to a geothermal unit.

The solution is indeed novel and could be implemented on a large scale after the same robots are replicated using bigger parts. This just goes to show that with appropriate training and mentorship, Pakistani high school students and beyond can outclass qualified engineers to create innovative products! 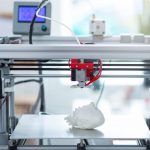 Why 3D Printers shouldn’t be banned in Pakistan?