APIMatic to Represent Pakistan in 10th Edition of Blackbox Connect

Google for Entrepreneurs has selected 15 startups for the Blackbox connect scheduled to be held on February 9th-20th 2015 in Palo Alto. These startups were selected based on nomination from the participating partners of Google for Entrepreneurs. APIMatic – a startup providing tool for automatic SDK generator, will represent Pakistan/New Zealand at Silicon Valley next month.

Syed Adeel Ali and Zeeshan Ejaz Bhatti co-founded the startup, APIMatic, last year while completing their Phd at University of Auckland, New Zealand. ‘Return on Science’, a NZ based research program, selected their research project as a potential candidate for commercialization. The startup provides a developer’s tool to help reduce the API interaction burden through automatically generated SDKs in major programming languages such as Java, PHP, Python, and Ruby etc.

The CEO explains on his LinkedIn page, “Smart devices are smart because they can ‘interact’ with other devices and systems, where APIs (interfaces to expose the functionality of a software system) largely serve as the backbone of such interactions. Developers combine this interaction-via-API code along with design and business logic to develop software or ‘apps’ for smart devices. However, consuming platform-independent APIs in platform-dependent smart apps is still a challenge faced by app-developers, and it becomes severer with API updates and changes.”

Blackbox Connect empowers innovative founders through proven methodology to help them grow startups both in their home countries and globally. Founders will be given the opportunity to pitch and show their product to hundreds of invited top venture capitalists, industry leading corporate innovation officers, business development professionals and a community of globally minded tech influencers and reporters.

On the occasion, Mary Grove, Director of Google for Entrepreneurs, said, “We believe in Blackbox Connect’s vision of building a global community of entrepreneurs who come together in Silicon Valley for an immersive two weeks — and then return to their home countries inspired to continue being leaders in their startup communities. We’re proud to partner with Blackbox to support a truly global talent pool.” 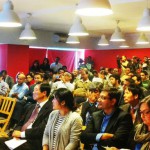