The tech-giant Apple has announced its plans to establish its very own development center in India, a rising tech hub and one of the biggest consumer markets around the world.

In a span of just a few years, India has emerged as an incredibly promising tech-hub and the birthplace of many innovative startups and that growth in entrepreneurship has brought the country into the spotlight of global tech-giants, and most importantly, Apple. In a report in the Economic Times, the company has now officially confirmed its plans to establish a $25 million development center in Hyderabad, India.

“We’ve been investing to expand our operations in India and are thrilled to have passionate customers and a vibrant developer community across the country,” said an Apple spokesperson.

Employing around 4,500 people in the construction, the facility will cover an area of over 250,000 square-foot with space for 150 employees. The work on the facility will be started later this year but Apple has confirmed that it will be constructed at the Tishman Speyer’s WaveRock properties.

“During hard times like now, it provides an opportunity to invest in newer markets such as India where there are long-term prospects,” said Tim Cooks, the CEO of Apple.

Google’s Alphabet may have taken the lead in the chart for the richest companies on the planet, but Apple is still second in that race and with huge cash reserves of more than $200 billion. It is also the most technology profitable company and as such, they are on the constant lookout for new markets to explore and offer their products in. With a population of over 1.25 Billion and also the world’s fastest-growing smartphone market, India has always been marked as a sector for explosive growth a long time ago and finally, Apple has taken the first step by establishing its very own development center. 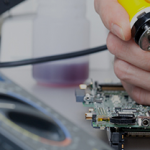