Huawei slipped, Apple swooped. It’s really as simple as that. With smartphone shipments surging by 22 percent to record levels in the fourth quarter, Apple rose to become the top smartphone seller in the world as rival Huawei’s sales slumped as a result of the US sanctions finally taking effect.

Apple’s expanded number of models and a new look for the iPhone 12 lineup, along with its focus on 5G-enabled devices, played a huge role in driving up demand across the world, including China, home to rival companies like Huawei and Xiaomi.

As data from research firm IDC shows, the Cupertino-based consumer electronics giant hit a record 90.1 million smartphone shipments during the fourth quarter, giving it a global market share of 23.4 percent.

“In China, Apple seized the perfect opportunity to capture Huawei’s market share in the high end, when the latter has essentially not enough supply even though demand for the brand is still there,” said Nicole Peng, who tracks China’s smartphone market at Canalys.

The data comes in the wake of Apple reporting record holiday quarter sales on Wednesday, with revenue crossing $100 billion for the first time.

Sales in Greater China, which includes Hong Kong and Taiwan, surged by an impressive 57 percent.

“We had two of the top three selling smartphones in urban China,” CEO Tim Cook told Reuters in an interview, adding that upgraders in particular had set an all-time record in China.

Meanwhile, having been battered by the previous US administration’s blacklisting on national security grounds, Huawei suffered a drastic drop of 42.4 percent in shipments to 32.3 million.

According to IDC, the company now sits at number five in the world, with Oppo (number 4) and Xiaomi (number 3) sitting atop it with shipments soaring 10.7 percent and 32 percent respectively.

Samsung, of course, has to settle for runner-up position with a market share of 19.1 percent. 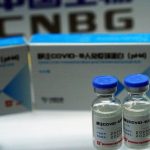 A special plane to bring COVID-19 vaccines from China, says SAPM on Health