It can not get any worse than this!

Facebook made a dumb and outrageous mistake just recently when it asked a limited number of users in a survey that is it okay if an adult man asks a 14-year-old girl for “sexual pictures” in a private chat. Soon after that Facebook faced backlash on Twitter when several people including journalists of mainstream media outlets questioned about Facebook’s stupid survey. Facebook accepted the mistake at first place but keep defending their point of view that why they asked that question.

Jonathan Haynes from The Guardian initially posted screenshots of the survey on the Twitter, which showed both question and four options as answers, as the survey states,

“In thinking about an ideal world where you could set Facebook’s policies, how would you handle the following: a private message in which an adult man asks a 14-year-old girl for sexual pictures.”

Well, if you think that this question is inappropriate to ask on Facebook’s platform then you might be surprised to see the answers. One of the answers states; “This content should be allowed on Facebook, and I would not mind seeing it.” Here are the tweets of Haynes,

And asked this … and I’m like, er wait it making it secret the best Facebook can offer here? Not, y’know, calling the police? pic.twitter.com/t2UZuKalfk

Where Facebook claims that it wants to take the suggestions from its users to make policies, what on earth makes them think that they are the one to decide these types of matters. This is the job of lawmakers who have decided already decided inappropriate interactions between adults and children unlawful a long time ago in every region of the world.

It must be noted that this survey appeared in News Feed of few thousand users from Facebook’s 2.2 billion monthly active users.

Facebook’s VP of Product, Guy Rosen, responded to that matter and accepted the mistake of the company.

“We run surveys to understand how the community thinks about how we set policies. But this kind of activity is and will always be completely unacceptable on FB. We regularly work with authorities if identified. It shouldn’t have been part of this survey. That was a mistake.”

This still doesn’t answer the question that why this survey was created in the first place. Let’s see what Facebook can do more about the matter until then keep following TechJuice for more on Social Media news. 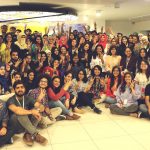 These are the winners of Pakistan’s first Startup Weekend Women