Google makes Wellbeing tools a must on new Android phones

All Android phone manufacturers are now required to include digital wellbeing tools in their new phones, according to a new GMS (Google Mobile Services) agreement. The agreement states that all products that come with Android 9 Pie or Android 10 preinstalled, as well as those that plan to upgrade to those Android versions after September 3rd are required to comply with this requirement.

The agreement, discovered by XDA Developers and 9to5Google, states that the new phones must include either their own or Google’s Digital Wellbeing app digital. The app should include access to information, such as the total amount of screen on time, a number of devices unlocks, and the count of notifications received on a per-day and per-hour basis. The app must also store usage history for at least one week. Another big feature is parental controls, which are also a must. This is so consumers can keep track of their smartphone usage throughout the day and be aware of the fact that extended use can result in physical harm. Other features that need to be included are the ability to schedule Do Not Disturb mode using Wind Down as well as app usage limits among other things. 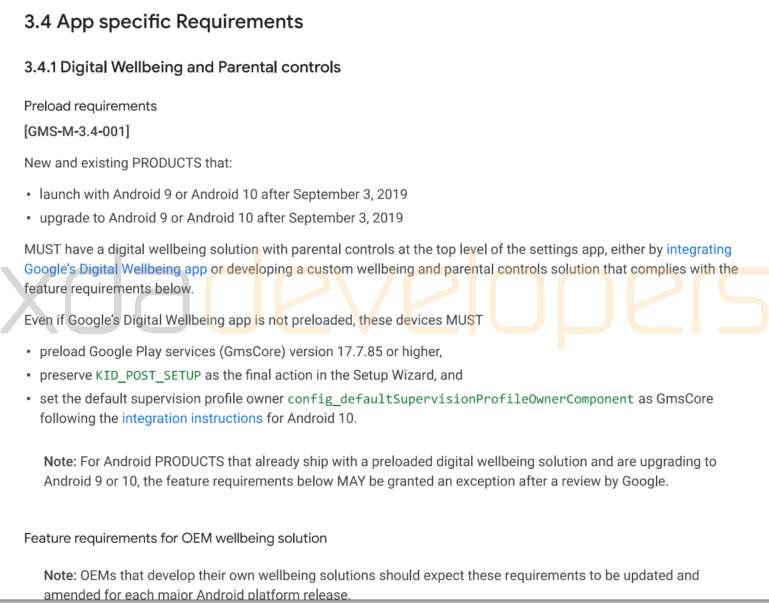 Most companies are expected to just preload Google’s aptly named Digital Wellbeing app, however, some brands will choose to make their own apps to fulfil this purpose. These features are especially useful for parents to limit how much time their children spend staring at screens. Furthermore, this will undoubtedly make it easier for users to cut back on their smartphone usage and will encourage them to be more active instead.