Oh no! Google Pixel 2 have big fat bezels. This year can be considered as the year of bezel-less phones but things seem to be different at Google.

Google Pixel 2 and Pixel 2 XL are going to be released in a few days. Since Google flagships, these phones are 2 of the most awaited phones of this year. The phones have already leaked several times with renders and different specifications. But today, the famous Evan Blass, tech blogger, and leak expert, has shared a clear image for us and this is the best look yet at the Pixel 2 XL. Some renders of Pixel 2 are also out with a clear look on the smaller phone.

Also Read: This is our best look yet at Huawei Mate 10 Pro

As it can be seen in the images, the Google Pixel 2 comes with a big bezel on top and bottom. Given that almost every other manufacturer is moving towards bezel-less design, this does not look like a smart decision by Google. Samsung Galaxy S8 came almost 10 months ago and it comes with a Bezel-less design and Apple also announced iPhone X with a complete bezel-less front.

These are the Google Pixel 2 and Pixel 2 XL https://t.co/cXCs560jNH pic.twitter.com/f3P47aeZ2I

However, the Pixel 2 XL has significantly less bezel than the Pixel 2. But the bezels are incomparable with the bezel-less phones available in the market today.

Moreover, the market is already overflowing with dual camera phones but both of the Pixel phones are expected to come with a single camera. Which means that Google is not following the trend of dual cameras as well. The original Pixel and Pixel XL were among the best shooters of last year. Let’s see how well does Google compete with the dual camera phones of this year with their single camera setup.

Moreover, the phones will feature the Snapdragon 835 chipset. It is the same chipset featured in most of the flagship phones of 2017. 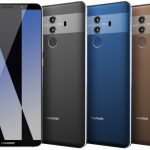 This is our best look yet at Huawei Mate 10 Pro