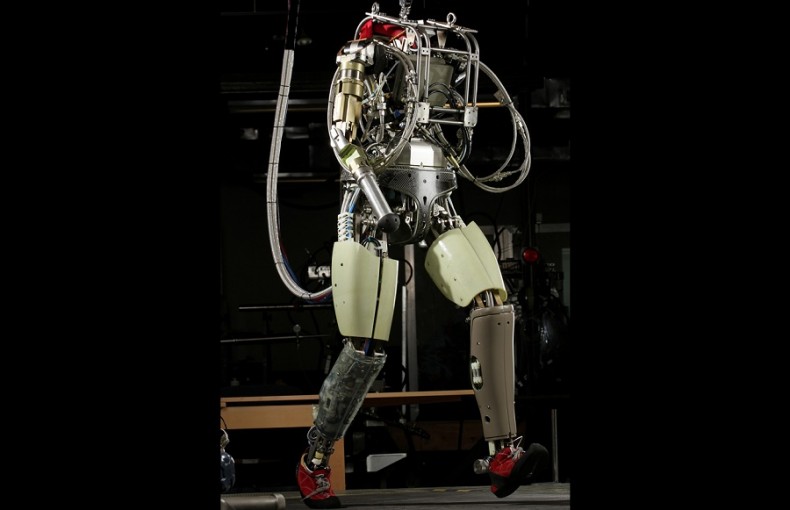 The race to creating robots has been on since ages and although we are getting closer, we are still quite a long way from creating a truly self-aware robot that can survive in the real world. There has been a lot of progress in the field of robotics in the last decade or so. Just this year, we saw a new Robotics Cheetah robot from MIT which was capable of incredibly high speeds and could also jump over obstacles, but it did look pretty terrifying.

Now, a Google-owned company called Boston Dynamics has showed off a Humanoid robot of their own and not only does it look pretty promising, it is also much more human-like.

Called “ATLAS”, this is a two-legged humanoid bot that can walk over any surface that a human normally could. In the past, robots have had problems balancing themselves when walking over rough or jagged surfaces but ATLAS does not seem to have this problem. Boston Dynamics even went ahead and tried out their robot out in the wild and you can see a brief glimpse of this bot storming through the forest.

ATLAS is a high mobility robot specifically designed to function on rough and challenging environments. Just like a normal person, this bot has two hands, arms, legs, feet and a torso. Along with that, it also comes with a head fitted with stereo cameras and laser range finder.

Boston Dynamics is known for its work in engineering and robotics design, especially for their quadruped robot for the US-Military called the BigDog. Google acquire Boston Dynamics in 2013, but the recent re-organization of the search giant means that Boston Dynamics is now under the wing of Alphabet. Boston Dynamics has closely worked with DARPA ( Defense Advanced Research Projects Agency) for advancements in robotics.

Still, the company has a long way to go since they clearly state in the video that their bot requires an off-board electric power supply via a flexible tether. Basically, this means that the bot can’t function without being connected constantly to a cable. However, they are working on a version which will be able to circumvent this problem.