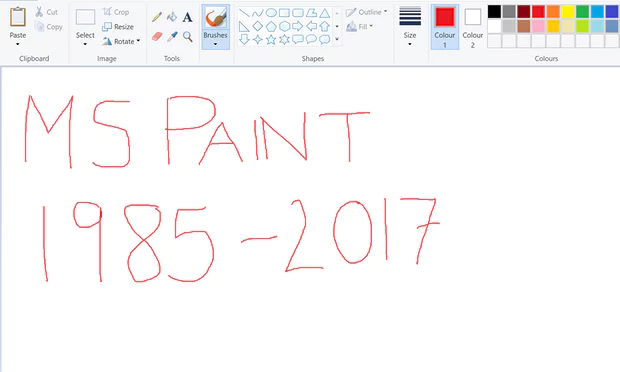 From drawing stick figures to making sneaky edits to photos, a lot of us started our journey as amateur graphic designers on Microsoft Paint. MS Paint was that one app on our computers that went from daily usage during our childhood years to that old friend we would rely on for our immediate graphic related work. And now Microsoft may be killing Paint.

News has surfaced that the iconic application, which was first introduced in 1985 with the first version of Window 1.0, is no longer “in active development” at Microsoft and may soon be removed altogether. Microsoft’s next Windows 10 update will bring with it several new features and some will be removed as well.

Microsoft has released a support document which lists the various features which will be killed off with the new update. And according to the document Paint has been mentioned in the list in which all features to be removed are mentioned.

In the document Microsoft goes on to say that,

“The following features and functionalities in the Windows 10 Fall Creators Update are either removed from the product in the current release (‘Removed’) or are not in active development and might be removed in future releases (‘Deprecated’).”

“This list is intended to help customers consider these removals and deprecations for their own planning.”

But alas, our reliable companion of several years will be soon be taken away from us. We’re extremely sad. But what makes us more sad is the fact that we’ll have to learn a new easy tool to make some quick edit on our graphics.