“People need to give Elon Musk a break, they are nitpicky on him” said the Netflix CEO Reed Hastings

Netflix Founder and CEO Reed Hastings just recently said that “Elon Musk is the “bravest and most creative” person on earth”. Discussing the recent criticism on Twitter CEO Elon Musk, Hastings also said that “People need to give Elon Musk a break, they are nitpicky on him”.

Talking to journalist Andrew Ross Sorkin onstage at the New York Times Dealbook conference, Hastings said that despite some mistakes that he made, Musk means well.

“I’m 100% convinced he is trying to help the world in all of his endeavors. How he goes about it is not how I would do it” said Hastings while continuing his statement.

Musk who is currently leading Twitter, SpaceX and Tesla has been showered with criticism ever since he took over Twitter. Many call him out because he fired over 50% of Twitter staff while others criticize him for not concentrating on other companies.

Celebrities are also not happy with the billionaire and his decisions, this is evident by the fact that many celebrities such as Toni Branxton, Sara Bareilles left Twitter right after Elon Musk stepped into office.

Musk thanked Hastings for his statements and made a tweet and said “Wow, thank you for the kind words”. 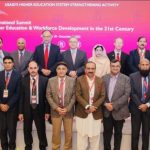