Samsung to recover 157 tons of Gold through Note 7 recycling

The refurbished Note 7 comes with the same specifications but a smaller battery which makes it safe to use and Samsung says that it will not explode anymore. But the old devices, including the ones which exploded and the ones which were risky, will be recycled by Samsung and it will recover over 157 tons of material from them.

In the recycling process, Samsung will separate all the components of the Galaxy Note 7 units, including the AMOLED displays, memory semiconductors, and camera modules and will use them as the replacement components for the new Galaxy Note FE in case something happens to them. Other remaining components will be sold separately.

Samsung faced a tough time last year when the Galaxy Note 7 units started to explode. The company had to discontinue the device and recall all the devices after even the safe devices started to catch fire. But this year, Samsung is selling more Galaxy S8 units than the last year’s Galaxy S7 which shows that people still trust Samsung.

Samsung is also planning to launch the Samsung Galaxy Note 8 next month. We’ll have to wait to see if Samsung can manage to sell more Note 8 units than the last year’s Note flagship. 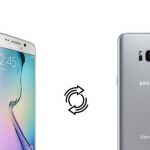 Samsung offers buy one get one free deal for Galaxy S8, with a trade-in