TechJuice > Lists > 10 Must have fun games for Windows Phone Users

10 Must have fun games for Windows Phone Users 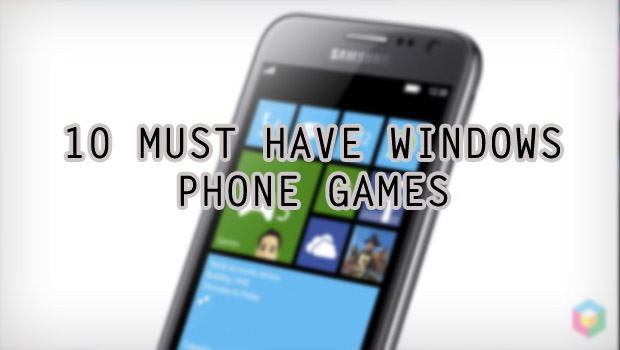 Although Windows Phone is a little behind Android and IOS as of now but the game hub of  Windows Phone is very rich and offers some of the best games that anybody could ask for. With your XBOX Live Account integrated right into your phone the Windows goes a step forward in easing out the things for the avid gamers.

This is one of my favorite games on Windows Phone. It’s fun and offers nice game play with some pretty cool funky graphics. It also offers Xbox Live Multiplayer mode where you can challenge your friends and check out who is better. Also you can have your XBOX live leader board and unlock achievements for XBOX Avatars. All you need to do is gently guide the chicken around obstacles and power-downs because chickens can’t fly you gotta help them 😉

You can’t miss out this one or you gonna face the wrath of the Birds. Initially the game was available in the old original series the ANGRY BIRDS and that too for free. Now there is the new addition for the ANGRY BIRDS SPACE and ANGRY BIRDS STAR WARS too however both the old series and the new one are not free anymore you need to pay to get them. But this one is worth the money. Angry Birds Rio is however still missing from the windows platform.

Anyone remember that old windows games menu having minesweeper in it? We all have played this one on our computers before the gaming industry grew bigger and better. Now this timeless classic is available on windows phone. Since this one is also by Windows so it includes XBOX Live Integration too. You can earn points or use points to unlock levels. There are two different modes Speed and Classic one having three difficulty levels .

With a doodle figure you got to run to save life and score high. This game has simple and very fluid kind of game play however the sound effects are really great makes you get absorbed in the game.

Remember those old brick games you may have owned while in your childhood? Now they are obsolete perhaps you can’t find them. Don’t worry on windows phone you can again have the fun of making up the walls but this time it’s not of bricks instead you need to stack up the monsters 😉

So why go out and play table hockey on some amusement park when you can have a match right on your mobile phone. Air Hockey lets you enjoy this sport in the most convenient manner. The best part is you can play not only with the machine but also with your friends too. Game play and sounds are quite similar to the real hockey table.

For all the true gamer’s windows phone has a treat for you in the form of a mobile version for one of the most famous game of our times the Assains Creed. This game is available in trial version and a paid full version. And also has a XBOX Live sync too now you can enjoy this game not only on your xbox but also on your phone.

Another one of the old board games right on your phone . Roll the dice own a house, a hotel or the whole street. This is also an XBOX Live game and is available in trial and full paid version.

This one is designed for the phones and also enabled for XBOX LIVE . You can track upto 18 achievements can access upto 6 weekly, monthly and lifetime leader boards too. With a touch screen you are more at ease on playing this strategy game then you ever was at PC. This one also comes in trial and a full paid version