Apple to use LG OLEDs instead of Samsung’s, reports Bloomberg

Apple has reportedly reached an agreement with LG for the OLEDs for the upcoming iPhones, Bloomberg has reported. OLEDs belong to a family of next-gen LEDs, just with an improved performance.

Apple used Samsung’s OLEDs in the iPhone X, which was apparently one of the biggest reasons behind the iPhone X starting at $1000. Sources have quoted that Apple does not want to keep their product prices out of consumer reach and thereby have decided to use a secondary supplier instead of relying solely on Samsung. Additionally, from a corporate’s point of view, Apple wants to reduce its costs in order to maximize profits, thus the shift from one supplier to the other.

South Korea-based LG Electronics is planning to supply 2-4 million units of OLEDs initially. This number is small relative to the amount of iPhone sales but according to industry experts, LG does not have the capacity to match Apple’s demands as of now, which would indefinitely force Apple to turn to Samsung for the remainder of the OLEDs. However, sourcing the OLEDs (even if it’s a small proportion) will put Apple in a better seat on the negotiations table with Samsung since now Samsung is not the only option they have, thus taking away their monopolistic position.

LG Electronics has been facing a downfall in revenue due to the dying trend of Liquid Crystal Displays (LCDs) in smartphones and other gadgets. For them, the sale of OLEDs and the deal with Apple is a way to revive the company in order to stay in-line with industry trends.

For Apple, the deal is likely to boost revenues as an alternate supply of OLEDs will indefinitely push the market price down, i.e. all the suppliers would start using competitive pricing instead of the industry following a trend of price-setting by the market leader, Samsung. A reduction in cost will invariably create a cushion for the price reduction, which can lead to an increased demand for the finished product.

The OLEDs supplied by LG will be used in one of the three upcoming 2018 iPhones. A source close to the company has told Bloomberg that LG wants to supply all the OLEDs for the model but currently lack the production capability to meet Apple’s demands.

Apple is reportedly planning to release three versions of the iPhone this year, including a cheap trim. Question is, will this strategy work for them or will consumers shun the idea of “exclusivity” going away from their products? 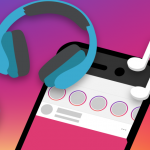 Instagram now lets you add a soundtrack to your stories