Social media giant Facebook is testing a solar-powered drone to give internet access to the people living across the globe.

The world is becoming more digital with each passing day, new technologies and digital techniques are being created by big companies to engage people in using technology. Similarly, after the advent of the internet, the world itself has become a digital village. And now social media company Facebook has decided to increase the capacity of the internet. And as of now, Facebook is testing a solar-powered drone that might one day provide the internet to the whole world.

The company carried out the testing flight in Arizona. It is to be noted here that this was the second time company the company tested its drone flight as earlier attempt ended in failure.

The drone is dubbed as Aquila. CEO of Facebook, Mark Zuckerberg said in a Facebook post, “When Aquila is ready, it will be a fleet of solar-powered planes that will beam internet connectivity across the world”. The drone will provide internet access to 4 billion people who are currently not connected to the internet.

The drone weighs around 1,000 pounds with sensors attached to it. It flew for one hour and 46 minutes. According to the company, it elevated 3,000 feet. Moreover, the drone can run on autopilot mode as well.

The company has also recently rolled out a massive update for its users, allowing users to find WiFi hotspots. The company has introduced a new app for this purpose. 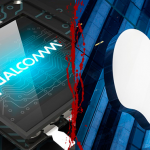 Qualcomm is trying to get iPhones banned from being sold