A surge in demand for electronics as more people stay home due to the coronavirus has led to shortages of semi-conductors. This shortage is now impacting Xbox and PlayStation 5 production at a time when demand for both consoles has been exacerbated by the pandemic.

According to CTV News, electronics retailers are facing stock shortages for consoles as well as the new graphics cards from Nvidia and AMD. Online retailers such as Kijiji, eBay, and Facebook Marketplace are selling these products for more than their original sale price.

AMD, a hardware engineering company that develops the CPUs and GPUs for both consoles revealed that console stock shortages are likely to be there for the foreseeable future.

“Demand will outstrip supply so there’s going to be some people that won’t get a-hold of the console when they want to,” said Piers Harding-Rolls, director of Ampere’s games research.

The $340 billion Nvidia hasn’t been able to meet the demand for graphics chips it designs for about half a year. Gaming chips have also regained popularity for mining cryptocurrency, a trend Nvidia is trying to counter by offering special mining chips in order to free up graphics chip supplies for gamers during a global chip shortage.

On a conference call with investors, Nvidia’s Chief Financial Officer Colette Kress said that a global chip crunch made it hard to keep the company’s flagship gaming chips introduced last fall in stock and that the chips would likely remain in tight supply through the fiscal first quarter.

The chip shortage situation worries Cristiano Amon, Qualcomm’s incoming CEO who needs to maintain the company’s position as a leader in mobile chips while also expanding into new markets with 5G connectivity.

“If you asked me, ‘what keeps me up at night?’ right now [it] is this supply chain crisis we’re having in the semiconductor industry,” Amon said in an interview with CNET.

Amon predicts that the shortage will continue till late 2021.

While the chip shortage is due to high demand “it is causing a lot of stress as the supply chain was not prepared to deal with the growth.”

The problem has several causes, according to industry executives and analysts, including bulk buying by US sanctions-hit Chinese tech giant Huawei Technologies, a fire at a chip plant in Japan, coronavirus lockdowns in Southeast Asia, and a strike in France.

Moreover, there has been an under-investment in eight-inch chip manufacturing plants owned mostly by Asian firms, which means they have struggled to ramp up production as demand for 5G phones, laptops, and cars picked up faster than expected. 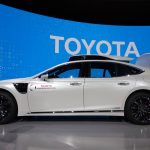