Understanding 5G: How it works and what to expect

The world is expecting to move on to the fifth generation of data connectivity technology commonly referred to as 5G. However, there is no clear idea yet about what the 5G technology will bring to us. According to some, it is a renaissance of wireless connectivity. Experts from the telecommunications industry believe that the technology could be available in the next 2- 5 years. Multinational companies such as Nokia, Samsung, and Ericsson are already working on equipment for making 5G operational!

The Massachusetts Institute of Technology have conducted research to give a fair idea of what to expect from wireless networks in the future. First of all, let’s understand what is the key difference between 5G and 4G (and why are we moving on?). The major change is in the wavelength. 5G technologies will use millimeter wavelength radio waves for communication, this means that the frequency for the radio waves will be as high as 24 gigahertz (GHz). The higher frequency means that more information can be transmitted in the same time period. However, the high-frequency waves are also more easily absorbed into objects. This means that the range of 5G towers will be much shorter than current 4G towers.

However, companies such as Samsung are working to counter this shortcoming. They are developing a workaround based on 32-antenna “phased array” that will allow the waves to “steer” through solid objects. Projects that have been conducted for testing out this 5G technology show that the data transfer rates can achieve as high as 10 gigabits per second even when the device is moving. Samsung also tested out a demo test with a car in motion through a micro-network of mobile transmitters to confirm that the data speeds were actually in gigabits per second!

According to Intel’s chief wireless technologist, Ken Stewart:
“What the consumer will see are ever richer experiences and high-resolution video on mobile devices. Instead of playing Pokémon Go while watching phone screens, they’ll be doing it in fully immersive, 3-D environments with fast refresh rates.”

Currently, the United States, is the first and only country to have the 5G spectrum of frequency available for commercial use. This means that it is likely to be the first country to adopt this technology. In Pakistan, leading telecommunication company, Zong, is also looking to test out the 5G technology, while State Minster of Information Technology in Pakistan, Anusha Rahman, has said that Pakistan will get 5G by 2020. 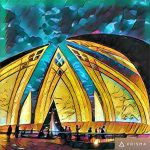 These Prisma-fied pictures of Pakistani monuments have gone super viral