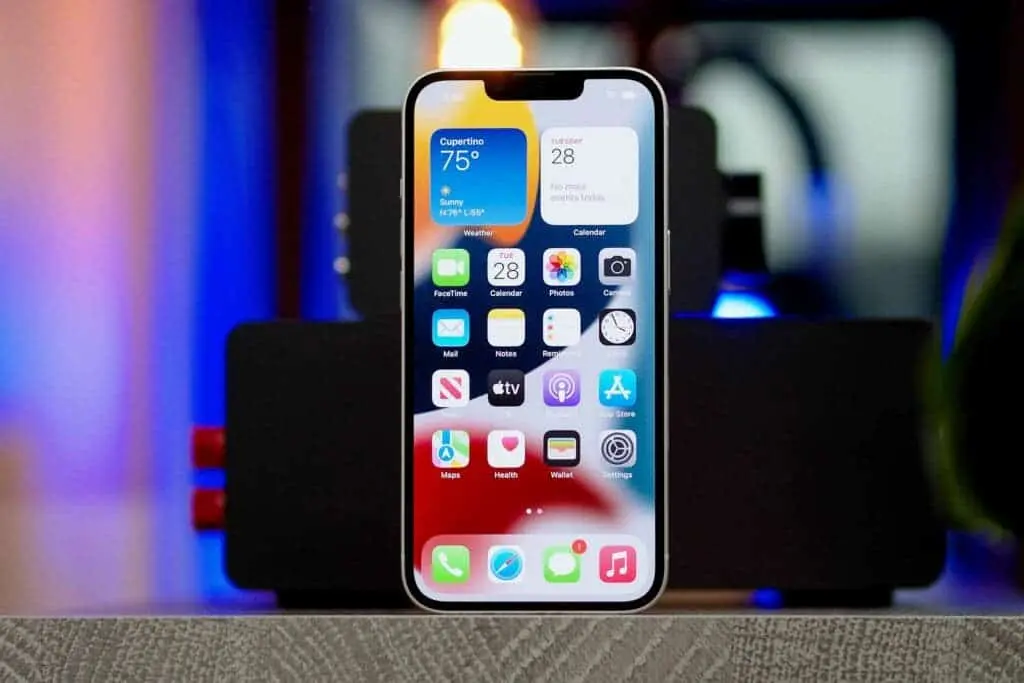 Last month, Apple launched its new flagship device iPhone 14, and like all releases, Apple claimed that they have created something that can revolutionize the world and might eradicate all of your worries, but after the launch, consumers’ reaction to the device is disappointing. If we dive deep into the device we will get to know that iPhone 14 is the same as iPhone 13 and they don’t have a lot uncommon between them.

They did some magical works combining hardware and software to work seamlessly with the notch or Dynamic Island thing. The Pro models came with a lot of new features that should be enough to convert a lot of Android users to iOS users for sure. But it is enough for you to spend extra $700-$800? 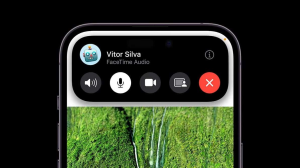 Here we will discuss a few specs of the iPhone 14 and you can decide for yourself if it is smart to upgrade from iPhone 13 to iPhone 14. I will not talk about the iPhone 14 Plus because at least, it has a bigger display.

For iPhone 13, Apple packed a massive battery considering the phone’s size, allowing it to deliver up to 15 hours of video streaming and up to 75 hours of audio playback. On the other hand, iPhone 14 has squeezed some additional screen time out of the phone, but not by much. In fact, the battery on the iPhone 14 is virtually the same size as on the 13. Apple rates the iPhone 14 for up to 16 hours of video streaming and 80 hours of audio playback. While those are definitely some impressive numbers, they don’t deserve another thousand dollars to be spent on them when you already got iPhone 13.

If you own an iPhone that came out in the last couple of years, you already know it has a great camera. Apple did make some improvements to the iPhone 14’s new camera but, the actual upgrades are only included in iPhone 14 pro, such as 48MP sensor only landed on the iPhone 14 Pro.

The “not-pro” iPhone 14 has a 12MP camera sensor, just like the iPhone 13. For the iPhone 14, Apple did include a larger sensor that can take in more light, which means that the iPhone 14 has better low-light performance, but ask yourself this: how often do you actually shoot in dim lighting? 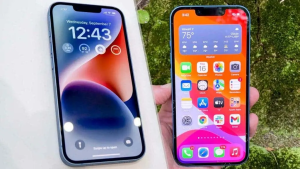 The iPhone 13 also comes with a 6.1 Super Retina XDR OLED display with Dolby Vision. It has a brightness of 800 nits which can go as high as 1200 nits at its peak. It also has a 60Hz refresh rate with the resolution set to 1170 x 2532 pixels. Just like the iPhone 14, the iPhone 13 also has a Pixel density of 460 PPI with an 86% Screen To Body ratio. In terms of screen protection, it has scratch-resistant ceramic glass and oleophobic coating to do the job as well. And let me break it to you, iPhone 14 has the exact same number, not even one thing have been upgraded in the display of iPhone 14 at all.

Although the iPhone 14 Pro packs Apple’s latest and greatest, the A16 Bionic, the regular iPhone 14 is powered by the older A15 Bionic chip—the same one in the iPhone 13 series. Although it’s no slouch by any means, it does have some limitations. One of the biggest challenges with any mobile chipset is managing heat, and under high load, the A15 Bionic definitely gets hot. If you’re playing a demanding game like Genshin Impact, you could see frame rates drop and your screen brightness reduced as your phone tries to keep itself cool.

We can go on and on with this comparison. In fact, both phones feature the same storage configurations as well. You are getting 128GB, 256GB, or 512GB in both models. There is a difference in the RAM though. While the iPhone 13 comes with 4GB of RAM, the iPhone 14 runs on 6GB of NVMe RAM. But is it worth the extra cash?

Eve Jobs, the daughter of Apple cofounder Steve Jobs, was right when she posted a meme on her Instagram story, joking about the iPhone 14’s similarity to iPhone 13. The meme said;

“Me upgrading from iPhone 13 to iPhone 14 after Apple’s announcement today,” while showing a man holding up a shirt identical to the one he’s wearing. 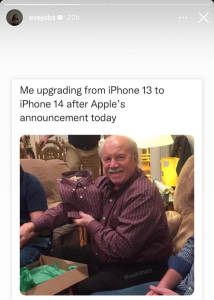 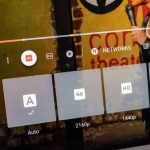