Minister for Information and Broadcasting Chaudhry Fawad Hussain on Monday said modern technology would play a key role in ensuring transparency in elections, further playing his role in paving a favorable national narrative regarding the deployment of E-voting.

Fawad Chaudhary had earlier stated that Electronic Voting would render election results in 20 minutes instead of days,

The government has upped its ante concerning Electronic Voting Machines and I-voting or E-voting system integration. Key members of the government, including the President, ministers, and the PM himself, have time and again called for Electronic voting, going so far as to hire a Spanish IT consultant to develop an E-voting mechanism for 28 crores.

The government’s rapid transition towards an electronic voting system has continued despite strong reservations by the opposition parties and the election commission. 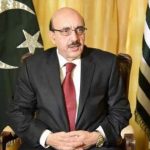 Tech vital to prevent the spread of pandemics, AJK President